Personality as a Predictor of Depression Symptoms in Burn Patients

The results of a pioneering study conducted at the Vall d’Hebron University Hospital with adult patients admitted to the Burn Unit suggest that some personality characteristics might be used to identify the most vulnerable patients who may develop more severe depressive symptoms at different points in their recovery, interfering with the process of rehabilitation.

Rumination is characterised by an effortless recurrent regurgitation of recently ingested food into the mouth, with consequent spitting and/or re-chewing and re-swallowing. A study with 28 patients detected the manoeuvre that causes regurgitation by measuring the electrical activity of the abdomen and chest muscles. Later, patients were able to suppress rumination.

Development of a Harmless Artificial Virus for Gene Therapy

Researchers of the Nanobiology Unit from the UAB Institute of Biotechnology and Biomedicine have produced an alternative to the use of viruses in gene therapy.The researchers synthesised nanoparticles which act as artificial viruses, capable of surrounding DNA fragments and releasing them as therapeutic agents, with no biological risk, into the interior of cells.

In Western societies, an increase in fragility fractures is associated with increased life expectancy. The WHO published in 2008 a tool to identify people with greater risk of fragility fracture and prioritise preventative actions among the most vulnerable groups. This thesis proposes a calibration of this tool for the Spanish female population.

Epidemiological and toxicological studies consistently have associated exposure to air pollutants with diverse negative health outcomes (related to cardiovascular, respiratory and other problems). To determine if air pollution (especially road traffic-related pollution) has any detrimental effect on the neurodevelopment of schoolchildren, the BREATHE project was born. In its first phase, air quality was assessed in classrooms and playgrounds of 39 schools in Barcelona and Sant Cugat del Vallès.

Epidemiological and toxicological studies have consistently associated exposure to air pollutants to diverse negative health outcomes (related with cardiovascular, respiratory and other problems). Therefore, it is very important to assess air quality, both in indoor (where we spend most of our time) and outdoor environment.

The BREATHE project (BRain dEvelopment and Air polluTion ultrafine particles in scHool children) was born with the objective of determine if air pollution (especially the road traffic-related pollution) has any detrimental effect in neurodevelopment of schoolchildren.

With this aim, air quality was assessed in indoor (classroom) and outdoor (playground) environments in 39 schools of Barcelona and Sant Cugat del Vallès. High concentrations of fine particulate matter (PM2.5), nitrogen dioxide (NO2), Black Carbon (BC, mainly emitted by incomplete combustion and especially related to diesel vehicles) ultrafine particle number concentration (UFP) and trace metals related to road traffic emissions were found. PM2.5 concentration was 1.7 times higher than the urban background levels, owing to high contributions from school activities. For instance, in the classrooms PM2.5 levels were importantly influenced by an indoor source characterised by organic carbon. This organic carbon might have its origin in organic textile fibres from clothing, in cooking and other organic emissions. Another important indoor source at schools was the chalk for the blackboards, which resulted in high levels of calcium and strontium. Moreover, important contributions from the sand of the playgrounds were also observed, both in the indoor and outdoor environments. Consequently, owing to the influence of school sources of PM2.5, it cannot be considered a good tracer of traffic emissions. 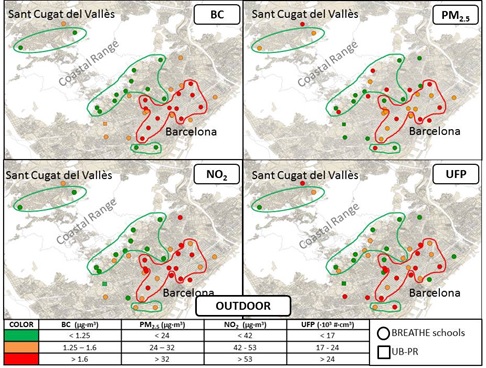 Figure 1. Spatial distribution of outdoor NO2, PM2.5, BC and ultrafine particle levels in BREATHE schools. Perimeters are based on the highest (red) and lowest (green) BC level tertile.

On the other hand, NO2, BC, ultrafine particles and antimony appeared to be good indicators of traffic emissions. The indoor concentration of these pollutants were similar to those found outdoors, indication an easy penetration of air pollutants. The concentrations of NO2 were 1,2 times higher at schools than at the urban background, suggesting the proximity of some schools to road traffic. The spatial variation showed higher levels of traffic tracers in the schools located in the centre of Barcelona than in the outskirts, highlighting the influence of traffic emissions.

Health effects from exposure to particulate matter depends on its chemical composition. The high levels of mineral matter and organic carbon (generated by local school activities) might not have any negative health effect. In the BREATHE project, we are working to determine the effect of the exposure to all this air pollutants in neurodevelopment.