Antoni Reguant i Gumà
Industrial engineer by the Barcelona School of Industrial Engineering and Bachelor of Computer Science in the first year of the Polytechnic University of Madrid.
He has given to the UAB Library of Science and Technology a large part of his personal library that comprises nearly all of the High School mathematics books published in Spain from 1938 to the 1970s; items of the first courses of the technical university careers from the beginning of the twentieth century until the sixties; and French, Italian books, as well as some German volumes, of higher mathematics research of the nineteenth and twentieth centuries. 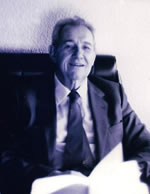 Joaquín Cerdá Ruiz-Funes
He was professor of history of law at UAB. In the year 2012, thanks to the efforts of Doctor Sebastián Solé, the sons of Dr. Cerdá made donation of a good part of his enormous library to the Social Sciences Library. This donation consisted mainly of books and journals of General history, History of law, Roman law, and other subjects of social sciences. They were basically the books with which he was trained as a historian of law and as an intellectual of universal curiosity. 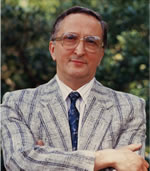 He was professor of the Department of Applied Economics at the Faculty of Economics and Business Studies at the UAB. His wife Elena Blanchard donated his extensive and valuable professional library to the Social Sciences Library. This bibliographical and statistical collection is focused on labour economics in general and in many of its aspects in particular: unemployment, flexibility and labour market, employment, wage structure and other issues, both in Catalonia and Spain and in Europe. It was also remarkable the donation of books in French that completed the existing collection in our library.

Carlota Solé i Puig
Professor of Sociology at the UAB, currently Professor emeritus. Since the year 2009 he has been donating her personal library to the Social Sciences Library. Her contributions are very important to broaden our collection in matters in which she has investigated: sociological theory, racism and discrimination, gender, domestic work and important social issues that are the current reflection of the society in which we live in, constituting a collection that enriches our holdings. 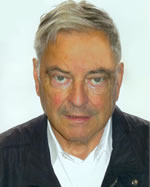 Professor Emeritus of the Faculty of Communication Sciences at the UAB. He has been the main driver of the Documentary Centre for Communication, the CEDOC, specialized in contemporary political documentation. Its exceptional documentary collection (almost 30,000 books, pamphlets and posters and more than 9,000 titles of journals) has been gathered thanks to the contributions of Doctor Giral, who has acquired and ceded much of the collection, in addition to performing an incessant activity to get new materials.


Daniel Jones
He was a professor at the UAB Department of Journalism. Throughout his professional life Daniel Jones formed an important personal library specialized in communication. In the year 2014 his family, represented by Professor Isabel Fernandez Alonso, made an important donation to the Library of Communication and the General Archive. The collection includes 5,400 books and 358 journal titles, from the field of communication in the broadest sense: History of the book and printing, church and media, history of the media in Latin America, biographies of great communicators, groups of communication, congresses, books of theory and critique, cultural industry, structure and politics of communication, and so forth. 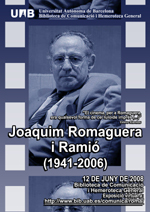 He was a historian, writer, film critic, researcher and jazz fan, creator of the ESCAC Media Library. In 2008, his film library was transferred to the Library of Communication and General Archive by his family. The Romaguera documentary collection is formed, first of all, by 3,000 books, many of which deal with the history of the world cinema and especially the Spanish and Catalan cinema. In addition, there are other related topics, such as monographs on directors, authors, cinematographic genres, etc. The collection of magazines, made up of 206 titles, collects the best headings on cinema, both international and national and local.
On the other hand, it is worth mentioning the collection of thematic dossiers, elaborated by Joaquim Romaguera himself, which give us an idea of the huge task of collecting documentation that he used in his research.

Jordi Castellanos i Vila
He was a professor of Catalan Philology at the UAB. The UAB Humanities Library has received his library and his personal archives from the hands of his widow Roser Guardiola. In this library, a whole life dedicated to the study and teaching of Catalan literature is condensed.

The Humanities Library has received the sponsorship of the Banco Sabadell Foundation, which has hosted the Jordi Castellanos Library, the Enric Lluch Library and the John Murra Library of the Catalan Institute of Anthropology, collections of great cultural value that are now partially within reach of the public. It has also supported the digitization of art magazines incorporated into the UAB Digital Repository of Documents.

Societat del Gran Teatre del Liceu
The archive of this private entity is constituted by more than 50,000 documents generated by the activity of the opera theater from 1840 to 1981. The Humanities Library organizes the digitization of this unique material in the world, and has created the database and incorporates the documentation in the UAB Digital Repository of Documents. All this is carried out thanks to the patronage of the Societat del Gran Teatre del Liceu. 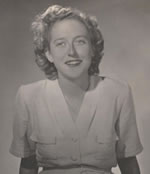 With a degree in Medicine in 1940, she directed, after the Spanish Civil War, the laboratory created by her father, Dr. Ramon Pla i Armengol, eminent tysiologist. The Library and the Archive of the Ravellat-Pla-Nuria Pla i Monseny Institute were donated to the Medical Library in 2007. Essential source for tuberculosis researchers during the first half of the 20th century, it is of paramount importance for three reasons; because it is a unique collection in Spain; it deals with tuberculosis from diverse disciplines, medicine, pharmacy and veterinary medicine; and because it has a large number of publications published in South America. This is why this library is an essential source for the knowledge of the origin and development of the Catalan medical, pharmaceutical and veterinary industry and its relations with Latin America. 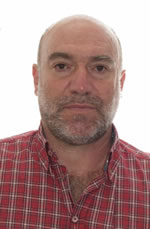