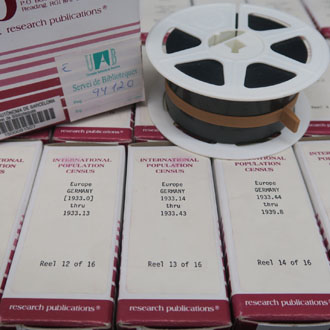 The collection of historical Statistics (18th-20th centuries) in microforms is a fund that the Library acquired at the beginning of the 90' of  the XXth century.  and this is a selection of documents with statistical information reproduced in microform by the publishers Chadwyck-Healey (now ProQuest) and Research Publications.

Description of the collection:

It is made up of several sub-collections:

1. International Population Census Publications. Europe. There are 72 titles (monographs) of historical censuses of the population of European countries from the 18th century to the 20th century in microfilm format.

3. Economic Surveys. Economic studies prepared by the Department of Commerce of the English Embassy of each country and contain economic, financial and commercial information from countries from most of the official sources. We have about 30 titles corresponding to European countries. Most start in 1921 and the most recent we can find is 1957 in some cases.

4. Annual Reports of the World's Central Banks. Selection of 27 annual reports, in our case, only European central banks in microforms from 1946 to 1983.

Deadlines for the collection: S. XVIII-XX

Date of incorporation of the collection: Towards 1993

Where to check the documentation:
- Communication Sciences Library
- UAB Catalog