Microbial contamination of drinking water sources poses a major threat to public health especially due to the emergence of waterborne diseases caused by microorganisms resistant to multiple antimicrobial agents. Silver might play a principal role in solving this problem. Actually, colloidal Ag (and more recently Ag-NPs) have been recognized and tested in various applications as excellent antimicrobial agents because of their high biocide activity. Silver could be the best alternative for a real descontamination.

One of the most serious concerns associated with the growing production and use of metal nanoparticles (MNPs) in real-life applications deals with the possibility of their uncontrollable release to the medium under treatment. The synthesis of both Polymer Stabilized MNPs (PS-MNPs) and ferromagnetic MNPs with desired functionality may deal with this drawback. Regarding that, one of the most promising routes to produce PS-MNPs nanocomposites is the Intermatrix Synthesis (IMS) method. The polymer-embedded nanostructures obtained by IMS method are potentially useful for a number of technological applications such as reagent-free disinfection of drinking water. 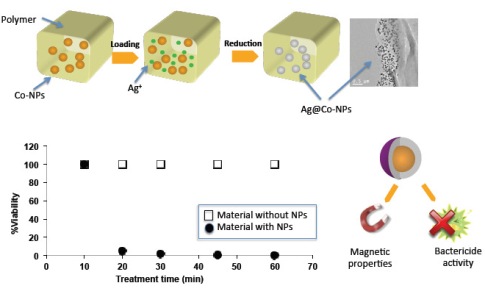 
Hence, the following important points should be taken into account when using Ag-NP-based nanomaterials for conventional and bactericide water treatment: 1) free Ag-NPs have been reported to be far more toxic than bulk Ag metal4. Thus, the use of stable Ag-NPs nanocomposites represents one of the most attractive solutions to NPs release, since a first level of safety is provided through matrix retention; 2) Ag-NPs should be located near to the surface of the immobilizing matrix to make them maximally accessible to bacteria. Microorganisms are not able to penetrate inside many biocide materials, mainly because of their size; 3) even if Ag-NPs are mostly retained in the polymer, an additional safety level for the recovery of accidentally released NPs would be extremely recommended.

In this issue, the use of ferromagnetic PS-Ag-NPs appears to be an excellent alternative. In such a case, NPs escaped from the polymer into the treated water could be easily captured by a simple magnetic trap.

The heterogeneous distribution of NPs in the polymers surfaces favoured the bactericide activity of the NC. The Ag-NC showed a great killing rate and effective antimicrobial activity for E.coli bacteria even for long time applications. This technology has been patented by UAB in March 2009 (P20090090).