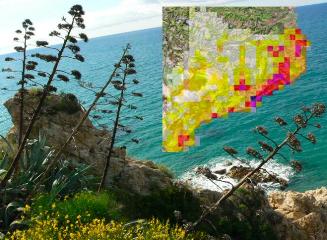 Understanding the patterns of consumption of water and electricity in water supply networks is needed to determine which factors influence the environmental impacts reduce its environmental burdens. The article presents general information and defines models for estimating variables such as power consumption or the length of the network in small and medium municipalities.

The yellow sugarcane aphid feeds on plants of the family of grasses. Researchers from the UAB and CREAF and from the University of León have discovered this species for the first time in Spain. It is needed a distribution map of this species in Europe in order to evaluate its potential pest behaviour on extensive European crops of rice or maize, for example.

A research team from ICTA-UAB has developed a new approach to study controversies over technology governance, applied to the case of nuclear power, which has been one of the most largely deployed man-made technologies. According to the researchers, this controversy can be understood as a series of mismatches between expectations and experience.

"Scientists must change their mentality if they want to protect nature"

Paul Robbins, director of the Nelson Institute for Environmental Studies at the University of Wisconsin-Madison, is one of the world's leading experts in political ecology.

Why areas with high diversity of plants are more invaded?

There are areas with high biodiversity, ie, very rich in species of plants, and other areas less so. Although in theory one would expect most biodiverse areas oppose more resistance to invasion by exotic plants, the opposite is observed: most diverse areas in native plants are also rich in exotic. Why?

There are shallow rooted plants and others with deep roots. There are plants that bloom in spring, while others do it in the fall. The fact that different plants posses different characteristics gives them the ability to use different resources. For example, the shallow roots absorb water from the surface, while the deep-rooted plants use depth water. For this reason, communities that has high diversity of plants tend to use all available resources more efficiently. When an exotic plant is introduced into a community, it needs to use resources to survive. It was thought that rich communities invaded by exotic plant would leave no resources unused, and hence preventing the exotic plant to grow and establish in the area. There have been several controlled experiments showing this hypothesis called "biotic resistance": high biodiversity experimental plots are more resistant to invasion (or establishment of exotic species) than plots with low biodiversity. However, It seems that this is not the case in nature, but rather the contrary: When there are large areas with high biodiversity, those also present high invasion levels. Why experiments and observations show the opposite trends?

Researchers at CREAF have solved this paradox considering what common factors affect both native and exotic biodiversity. They found that some geographical factors, such as a favorable climate and a heterogeneous landscape are linked to high richness of native and exotic plants. But this does not explain the whole story. The most important factor explaining why areas with more native species also has more exotics is human activity. On one hand, human transport and release exotic plants, but also release many native plants such as weeds. In addition, areas of greatest human activity suffer more changes and disturbances, which change the availability and distribution of resources. Because plants can not rapidly adapt to these sudden changes, the "biotic resistance" of the community found in the experiments decreases. Only by studying in detail all the factors involved, we can understand the relationship between biodiversity and invasions.