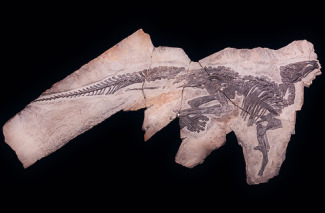 A new dinosaur in a prehistoric island in Tethys Ocean

A new dinosaur species, Tethyshadros insularis, found in Italy by the team led by Fabio Dalla Vecchia (Institut Català de Paleontologia), is the subject of a recent publication. The new dinosaur is related to the plant-eating dinosaurs family of "duck-billed" Hadrosaurids, but is more primitive than north-american hadrosaurs. The specimen, nicknamed "Antonio", lived at the end of the Cretaceous period in a small island in the middle of Tethys Ocean, a prehistoric sea between Africa and Europe.

The paleontologist of the Institut Català de Paleontologia Fabio M. Dalla Vecchia has published the study of a new dinosaur from rocks 70 million years old in Italy on the December issue of the Journal of Vertebrate Paleontology. Tethyshadros insularis, this the scientific name of the animal, is the second dinosaur species named from Italy. Complete dinosaur skeletons are extremely rare. The main fossil specimen of the new species, which is known worldwide with the nickname “Antonio”, is extraordinarily complete and articulated. It is the most complete skeleton of a medium-large sized dinosaur ever found in Europe since the discovery of Iguanodon and Dollodon in Belgium (1878) and one of the most complete dinosaurs ever discovered in the world.

It was a plant-eating dinosaur about four meters long belonging to the group of the hadrosauroid dinosaurs. It was more primitive than the famous and characteristic “duck-billed” dinosaurs (Hadrosaurids) of North America and Asia. It shows for the first time the whole and real body morphology of this kind of dinosaur similar but distinct from the “duck-bills”. Tethyshadros lived on a relatively small island in the western part of the ancient Tethys Ocean, between Africa and the North European landmass. At that time Europa was an archipelago of islands at subtropical latitudes. Differently from the new species, most of the known hadrosauroids lived on continents.